The festival of Moors and Christians 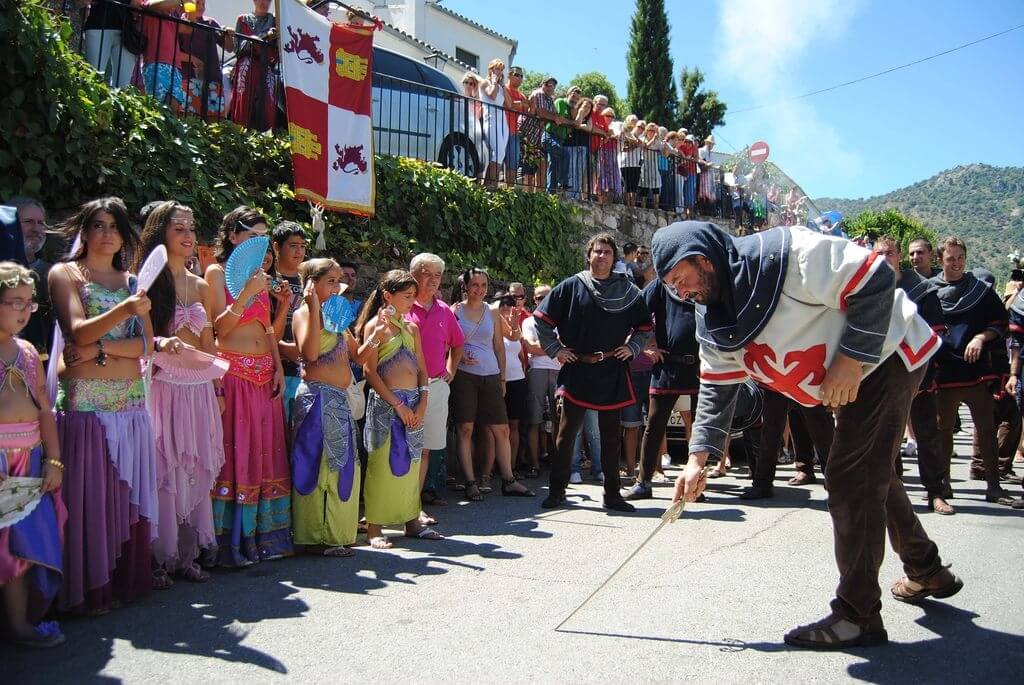 La fiesta de Moros y Cristianos  is held in Benamahoma, in Sierra de Cádiz, in honour of their patron saint, San Antonio. Benamahoma, a small village near Grazalema, whose name means the “Sons or House of Muhammad” each year on the first weekend of August recreates when the Christian armies reconquered Al-Andalus, and expelled the Moors from Spain. A celebration of the sixteenth century battle is celebrated every summer. According to legend, an Arab prince who was fleeing the Christians took refuge in Sierra de Cádiz. He greatly admired the greenery, orchards and abundance of water and vegetation and named the village Ibn-Mahommed hijos de Mahoma (the Prophet Muhammad).

Each year during the first weekend in August the charming mountain village of Benamahoma, located within the Sierra de Grazalema Natural Park with a population of around 500 people, turns into a fiesta. Possession of San Antonio (Saint Anthony) is the main feature of the battle between the Moors and the Christians. The festival kicks off on Friday night with a spectacular procession of Moors and Christians who march along Calle Real until they reach the Plaza de Toros, where the troops turn to face each other and present their banners. Both sides then attend the traditional religious ceremony in the chapel where they hang their banners and which begins the three days of festivities. 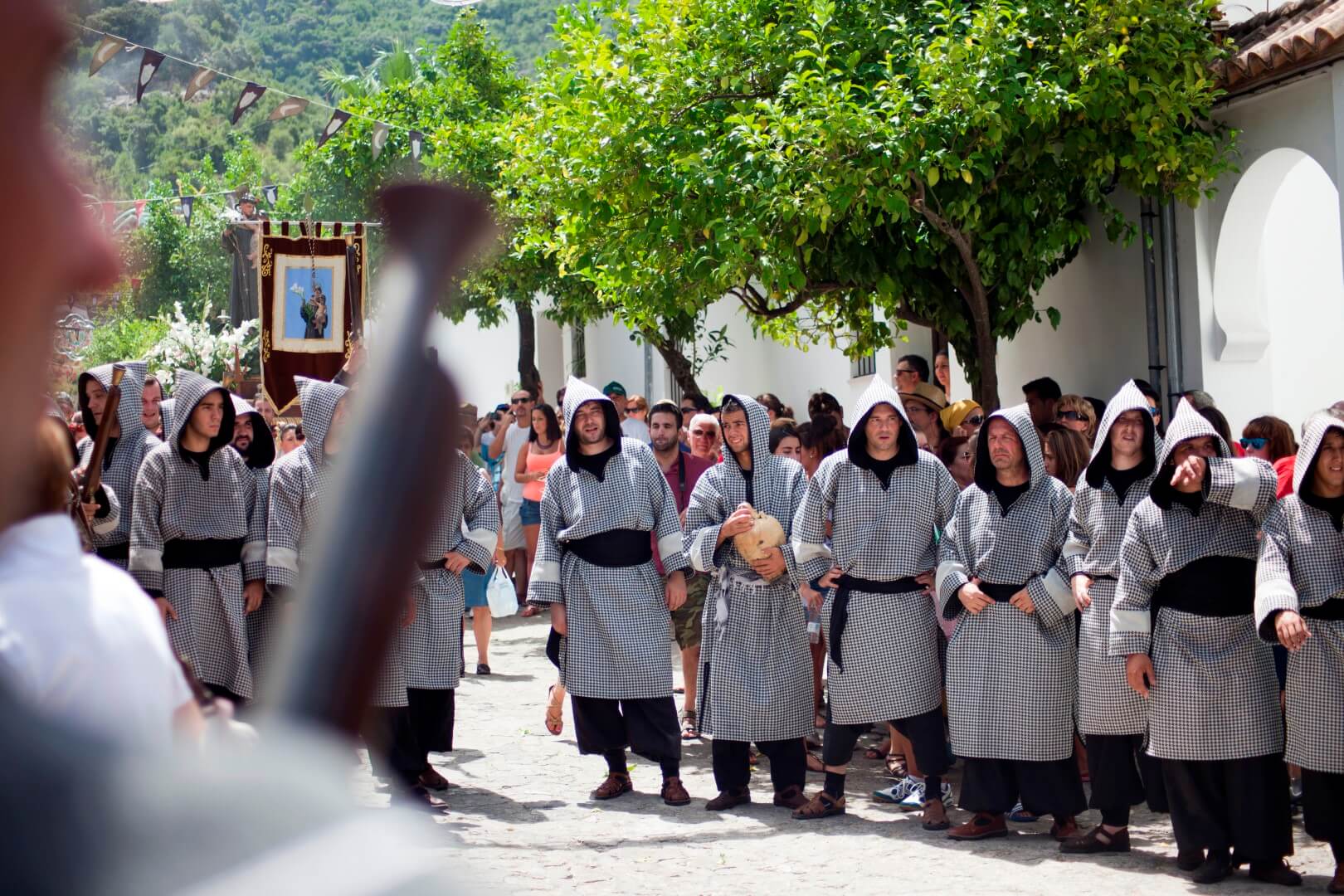 The traditional battle between the Moors and Christians is held on both Saturday and Sunday.  Children start the battle and then the older generation take over at noon. On Saturday the battle begins in the chapel which is dedicated to the patron saint, and on Sunday the armies leave the chapel and move to the source of the Guadalcacín River where the final battle takes place. Whilst the procession of the Saint is organised by the church door, the Moors are strategically placed in the village streets ready to attack. The captain of the Christians leads the procession into the village followed by the Queen of the Festival. After a few minutes, the Moors close in on the procession to take possession of the Saint and their captain approaches the Christians to communicate their intentions.

Each battle is preceded by the so-called embajadas (meeting of the envoys), in which the captain of each side reads a passage in an attempt to persuade the other to surrender. In Benamahoma, however, there are no written texts and only the most popular lines are used and remain mostly unchanged. The rest of the dialogue is improvised and the captains  generally use challenging and provoking phrases in a continuous exchange of insults. In any case in Benamahoma the confrontations are based on the struggles endured rather than on words and the provocations always achieve the expected result. The captains engage in hand-to-hand combat followed by the rest of the soldiers until fighting spills out onto the streets.

The first fight is ruled in favour of the Moors but the Christians continue to harass them to retrieve their Saint.
After several hours of fighting the Moors capture the image of the saint and store it in the chapel, built expressly for this purpose. Although the interior of the chapel boasts the usual architectural elements, the exterior is that of a mosque, thus presenting a unique creation that can only be explained by the festive tradition of this village. On Sunday as according to tradition, the Moors begin with an advantage over the Christians as San Antonio de Padua remains in their possession. The image of the saint is placed behind the rows of Moors and the Christians advance towards them. The battle this time begins with both hand-to-hand combat and blunderbusses, and almost always ends in both sides ripping of their opponent’s clothes.

The fights continue for an hour and a half along the procession route for the patron saint. Starting at the small chapel dedicated to the saint located in the village centre and ending at the source of the Guadalcacín River. The outcome of the battle is staged on the outskirts of the village near a fountain known as “El Nacimiento” (the birth) as the water is so pure. There, after two days of successive conquests and re-conquests of the image of the Saint, the definitive battle, which is the longest of the festival, takes place and the Christians eventually kill the Moors and take possession of the saint returning him to the chapel.

There is no limit to the amount of people involved in the fighting. In fact there have been years when there were only three or four men on each side. Nowadays there are almost fifty men who dress up and participate. Once the battle is over everyone goes to the food stands where a gastronomic tasting awaits. Heifers are also released on Saturday, Sunday and Monday afternoon and a prize for the best outfit is awarded. 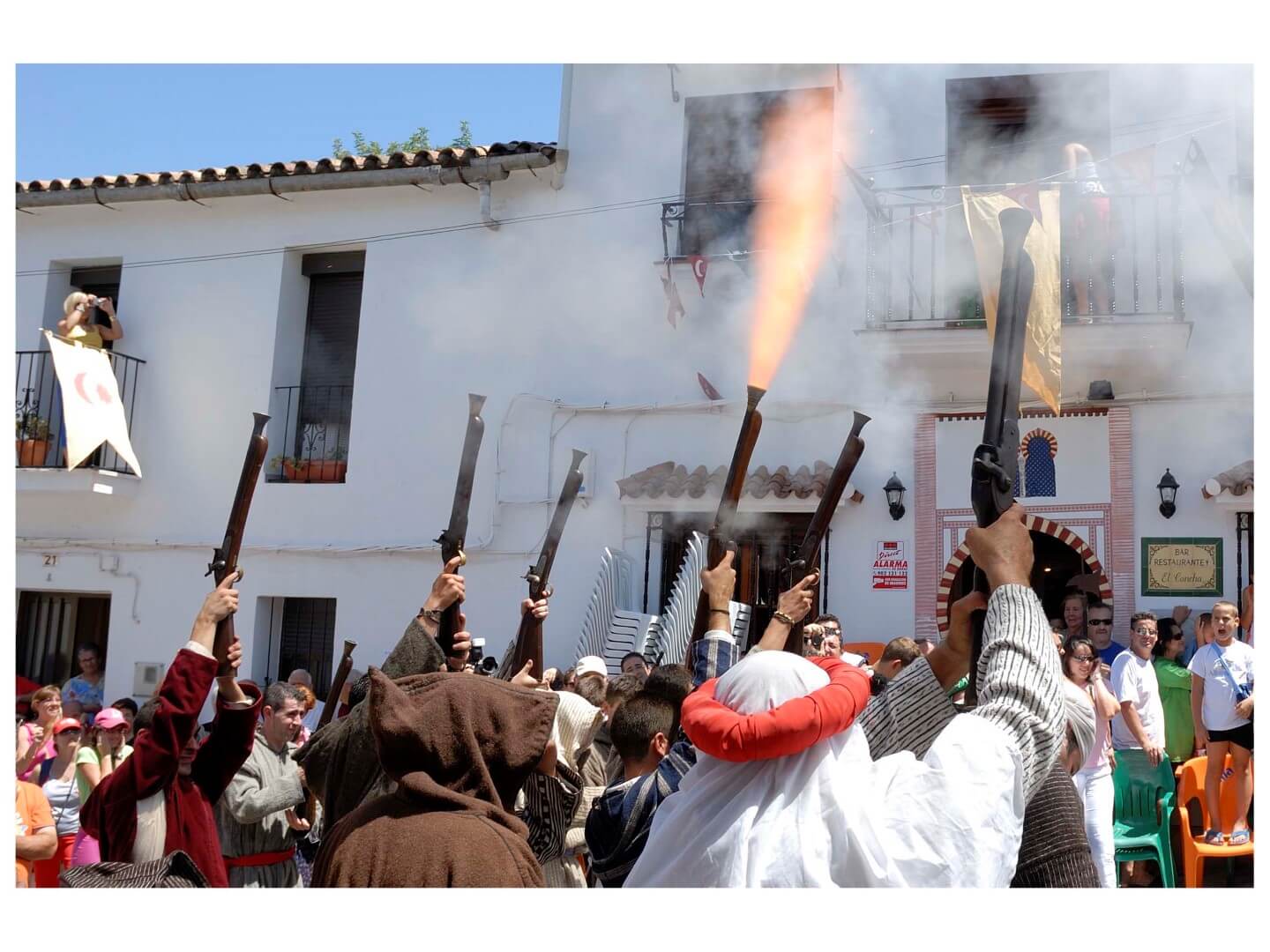 The nights end with dancing until dawn and at midnight on Monday there is a final fireworks display. Trophies from the different competitions are presented in the municipal booth where the dancing continues until the early hours of the morning. The festival is a very old tradition that originated in Andalucía in the form of festive fights between nobles and knights (the Moors and the Christians).

A reference confirms a festive struggle in the city of Jaén in 1463 when an important constable intervened. By the 18th century the tradition had been passed from nobility to the townspeople and from the towns to small villages. The tradition ended up becoming institutionalised and is now an official festival in honour of the patron saint.